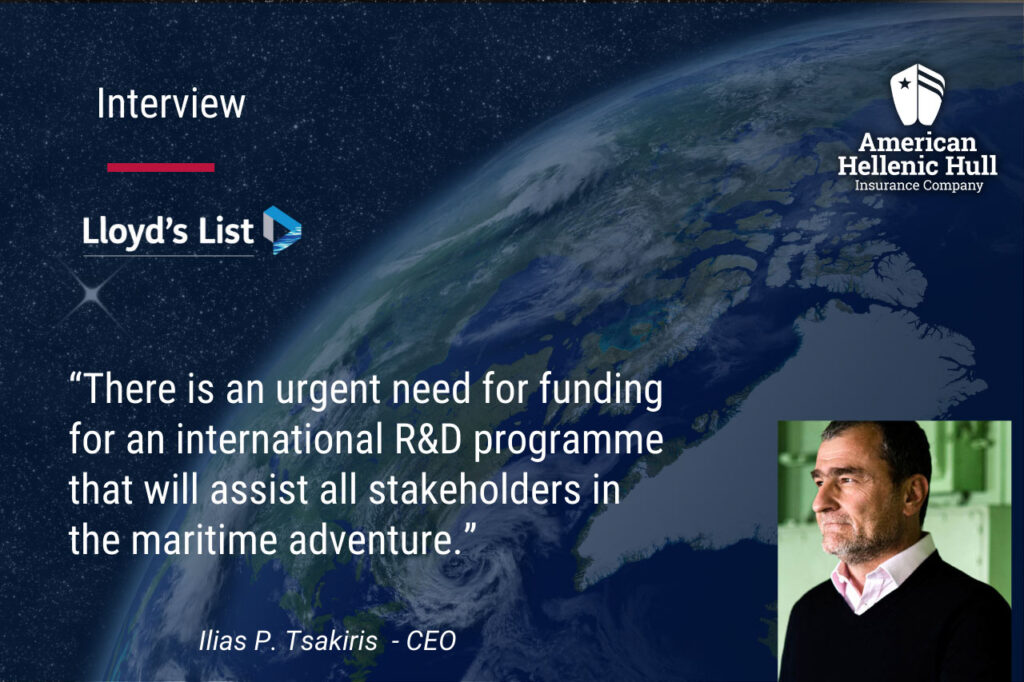 One of the most noteworthy additions to Cyprus’ shipping cluster is marine insurer American Hellenic Hull, according to Lloyd’s List’s Greece and Cyprus Report.

Only five years since its launch and approval by Cyprus regulators, American Hellenic Hull Insurance Company seems firmly established as a leading hull insurer, with an insured fleet of 3,200 vessels.

Reflecting its roots, about half of these derive from the Greek and Cypriot shipping markets, with the other half of the fleet managed from other maritime centres around the world.

The company’s upward trajectory has been acknowledged in various ways, not least by the election last year of chief executive Ilias Tsakiris to the prestigious Ocean Hull Committee of the International Union of Marine Insurance (IUMI).

He sees his presence at IUMI as enhancing the visibility of the maritime clusters of both Cyprus and Greece.

One of the reasons it has taken so long for a major hull insurer to emerge from the region is that it has been primarily a shipowning community and services have been under-funded in the past, but that is changing, he says.

“Especially in Greece and Cyprus, two countries with a long tradition at sea, there has been a lack of high level education in the marine insurance industry,” says Mr Tsakiris.

American Hellenic is working to fill the gap and is cooperating on education initiatives with the Insurance Association of Cyprus and the Cyprus Chamber of Shipping.

Education and training is a fundamental issue of shipping’s sustainability, he argues. “We envision an industry with high technical skills and it is imperative to staff the industry with well-trained, educated personnel.”

Since 2019 American Hellenic has a memorandum of cooperation with the World Maritime University, and it recently became the key funder of scholarships for the postgraduate programme in Marine Insurance Law & Practice.

The company has also become a driver for sustainability within its sector, with co-operations with UNEPFI Principles for Sustainable Insurance, Sustainable Blue Economy, UN Global Compact, Net Zero Insurance Alliance, Ship Recycling Transparency Initiative and others.

“Sustainability is not just a trend or a catch-phrase,” Mr Tsakiris says. “We believe it is also an intelligent way of doing business.

“The shipping industry is being challenged to achieve net zero emissions by 2050. Everyone agrees that decarbonisation is an urgent necessary but so many questions remain and there is a need for an international roadmap to provide a framework for shipping to undertake this dramatic transition effectively.

As a service provider to a large number of shipping enterprises of various sizes and resources, spread across the globe, the company is anxious that a two-speed shipping market is not created in terms of decarbonisation.

For the sake of the planet everyone needs to adapt but we should bear in mind as an industry that we have companies with extensive research and development departments of their own, as well as many highly reputable companies that do not have access to such facilities.

“There is an urgent need for funding for an international R&D programme that will assist all stakeholders in the maritime adventure,” he says.

As if to emphasise that addressing new realties is never smooth and their implications for marine insurers, American Hellenic calculates that last year 8.6% of all its claims were related to damage to the engine and equipment of vessels deriving from new fuels mandated under the new sulphur cap on the industry.

“Fuel to power shipping in the next years and decades is obviously a huge concern to insurers as it is to the shipping industry as a whole,” says Mr Tsakiris. “But there will be tectonic changes from the use of new technologies, too.”

Some of these, so far at least, can be entered mainly in the benefit column.

“For example, drones – now they are being used to monitor marine pollution, illegal activities, transporting items for the ships and conducting remote ship inspections, saving time and money.

“Among the negatives of this evolution in our industry are cyber-attacks, that are a growing risk as shipping company process become ever more digitalised,” he says.