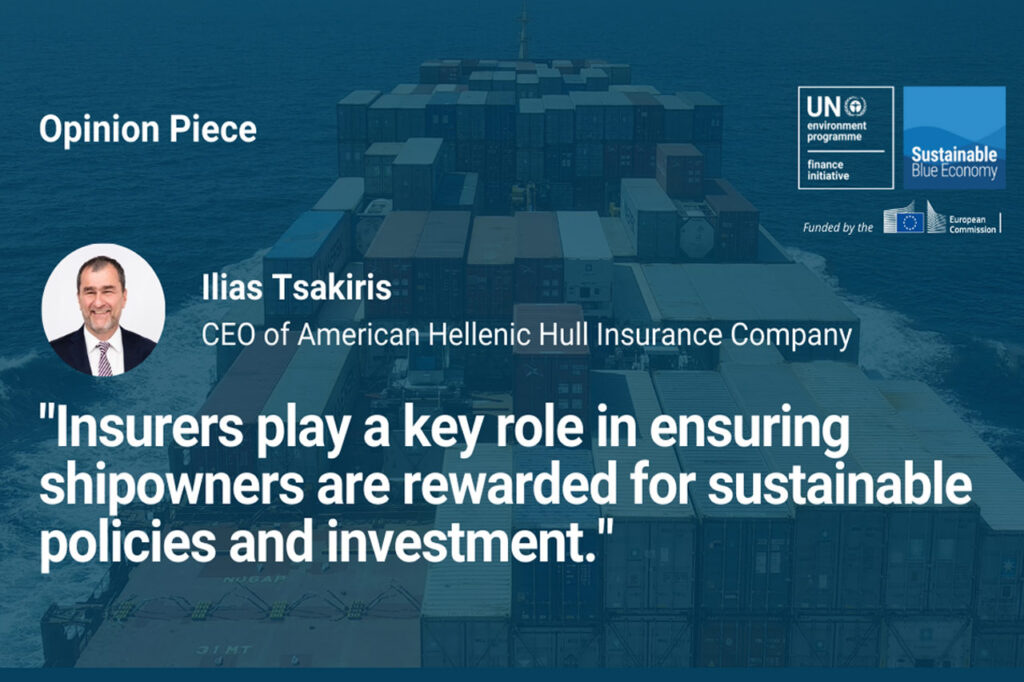 Ilias Tsakiris’ interview with UNEPFI on the Sustainable Blue Economy Finance Principles & the role of marine insurance in transitioning the ocean economy towards sustainability.

You have signed the UNEP FI Sustainable Blue Economy Finance Principles. Why did American Hellenic Hull Insurance Company take this step and has it been a challenge to adopt sustainable insurance practices?

Shipping itself is crucial to global sustainability. As the carrier of world trade it is the key component in bringing food, energy, vital goods, jobs and dignity to billions of people on the planet. Although ships have been rapidly improving their energy efficiency and their environmental footprint in recent years in response to climate change concerns, there is a lot of work to do in decarbonising the industry and in sensitising the international maritime community to the full spectrum of sustainable practices. Coming across the UN’s Principles for Sustainable Insurance and Sustainable Blue Economy Finance Initiative provided us with further food for thought as to how we should conduct our business as well as providing a blueprint for action in the sector as a whole.

By insuring the world fleet, marine insurers help to ensure this huge and vital industry is financially sustainable. But we believe that insurers in our sector cannot rest on their laurels simply by doing their job well, as vital as this is. We believe that a sustainable insurance company ought to actively educate the wider peer group as well as the industry it serves as recognition of sustainability issues remains in its infancy. We also believe that sustainability implies a direct engagement with wider society.

In our business, sustainability is closely related to prudence in underwriting where the prime focus of coverage should be responsibly-run, safe, modern, energy-efficient ships. We have adopted a series of sustainable and strict underwriting criteria. To be accepted, vessels at minimum need to be classed by members of the International Association of Classification Societies, whilst they need to fly white-listed flags and their age needs to be no more than 15 years old.

Overall it is in the DNA of underwriters to monitor and mitigate risk and sustainable underwriting has an increased sensitivity to risks including those arising from climate change, human rights violations, pollution, and the health and safety of employees whether ashore or at sea. With the nature of our business in mind, it has been relatively easy for AHHIC to adopt sustainable practices. We have been innovative in forging relationships and promoting education but as a relatively new company that has been in the market for just six years it is an advantage. Most companies find it difficult to confront an existing legacy of unsustainable operating practices and an incompatible corporate culture but we did not have that difficulty.

We came across the Sustainable Blue Economy Finance Principles almost from their launch. We have been able to embody a sustainable culture in our recruiting policies as we have grown. AHHIC has put the emphasis on recruiting young people with a sustainable outlook, so we have a very young team that is behind this approach 100%. In our business relationships with other insurance entities and professionals, we prioritise counterparties that share our commitment to sustainable insurance.

The International Maritime Organization’s strategy for decarbonizing the shipping industry aims for a 40% reduction in average carbon intensity by 2030, compared to 2008 levels, and a 70% reduction by 2050, compared with levels recorded in 2008 as a baseline. What challenges do you foresee will have to be faced in order for these goals to be achieved?

According to the ‘Getting to Zero Coalition’, which is an industry initiative to lead decarbonisation, hitting the minimum target by 2050 will require $1.2 to $1.6 trillion in investment.  A renowned researcher in the shipping industry, Dr. Martin Stopford, non-executive President of Clarkson Research Services, estimates the bill will rise to $3.4 trillion over the next 40 years. Even this estimate does not include the likely cost of zero-carbon fuels compared with conventional bunker fuel for ships.

The shipping industry faces having to make a transition from a single universal fuel to a multi-fueled future, with the various challenges this implies. The key categories are: (i) fossil-based fuels like LNG-LPG-Methanol, that are seen as transition fuels but still necessitate more costly ships (ii) Biofuels like HVO (advanced bio-diesel) and (iii) renewable fuels like hydrogen-ammonia-electricity. Currently the greener options are less cost-efficient and lacking in scale and infrastructure to meet the industry’s needs. Meanwhile they are currently commercially prohibitive for general adoption by the maritime industries.

An enormous research and development effort will need to be made, and financed, to develop new technologies and fuels if shipping is to be able to meet its decarbonisation targets. Sustainability also depends on the transition being managed in such a way that worldwide trade and communications continued to be served in a commercial and efficient manner that will not put too much of an extra financial burden on the public and the consumer.

As new, greener technologies and fuels are prioritized, this should not be at the expense of safety or crews. Safety issues will inevitably arise from new fuels – for example, ammonia is considered one of the most promising alternative fuels but essentially is toxic – meaning that further work and procedures will have to be considered before it can be safely applied as a widely-used marine fuel.

The Covid-19 pandemic has greatly complicated life on board ships for seafarers and in many instances has prevented crews from being able to disembark from their ships and return home at the time envisaged under labour contracts. Often, they have had to remain on board for additional months, as numerous countries have declined to allow crews to disembark and new crews to replace them.  The crisis has exposed a chronic lack of consideration to the seagoing work force who, I believe, should be recognised as ‘key workers’, and this is an aspect that needs taking into consideration at every turn in an era of sweeping change for the industry.

Finally, ships are huge capital intensive-assets and building them (to replace the less sustainable existing fleet) will itself cause onshore air pollution. As complicated as the picture is for decarbonisation within the industry, for the overall effect of shipping’s decarbonisation to be fully understood a fuller analysis of the lifecycle of a ship and the environmental footprint of shipbuilding, marine equipment manufacture and ship recycling needs to be done. We are planning on doing an analysis of the ship recycling industry as part of our membership with Ship Recycling Transparency Initiative.

How can the insurance industry play a greater role to transition the ocean economy towards sustainability?

Marine insurers have traditionally focused on accidental oil spills, which can cause damage to physical property and assets, ecosystems and natural habitats. But more recently, the focus has expanded to include the production of waste, air and ballast water pollution.

Many insurers build sustainability criteria into underwriting contracts (UNEP FI PSI 2012; IUMI 2020). A vessel that does not comply with regulations is in breach of warranty and insurance capacity.  However, we believe that insurers play a key role in ensuring that shipowners are rewarded for sustainable policies and investment in more fuel-efficient ships and reduction of CO2 emissions which is why we encourage our peers to join us in following the guidance on Marine Transportation from the Sustainability Accounting Standards Board (SASB 2021). Steps towards this can be taken through strict underwriting policies favouring such vessels and excluding older tonnage with a worse emissions profile.

As a vital service in ensuring maritime risks are affordably covered, we believe insurers should also use their status and relationships in the industry to educate stakeholders and promote sustainability principles.  AHHIC is actively engaged with the UN’s sustainability initiatives. For example, we have participated in the development of two pioneering guidance papers that act as a toolkit for companies’ sustainability strategies aiming to tackle ESG risks: “Managing Environmental, Social and Governance risks for non-life business”,  launched by UNEPFI PSI and “Turning the Tide: How to finance a sustainable ocean recovery”  launched by UNEPFI SBEFI. In addition to this, we firmly support the expected establishment of the Net Zero Insurance Alliance which will aim to further the key role of the insurance industry as risk managers, insurers and investors in supporting the transition to a net-zero economy.

As an elected member to the Ocean Hull Committee of International Union of Marine Insurance, my top priority is to increase the sector’s awareness of sustainability. Aiming to endorse the ESG issues dialogue in the international marine insurance industry, we have recently become the exclusive marine insurance signatory company of Ship Recycling Transparency Initiative through which shipowners disclose their ship recycling policies, practices and progress, enabling insurance providers, lenders, cargo owners, and other stakeholders to use the data to inform their decision-making and reward good practice through the market.

In addition, increasing understanding of marine insurance and the importance of sustainability in the sector are among the goals of AHHIC’s unique venture with the World Maritime University to include marine hull and machinery insurance on the WMU’s programmes for the first time. The initiative includes plans for a marine insurance postgraduate diploma, professional development courses and related events.

What is your recommendation to other insurance companies who may be interested in following in your footsteps and adopting the Sustainable Blue Economy Finance Principles?

As marine underwriters, we should invest in sustainable best practices to support the blue economy, invest in education and training of our executives, the wider shipping community and society at large. Meaningful change only occurs when all stakeholders come on board, so our recommendation to our colleagues in other companies is, definitely, to join the Principles as a Signatory and fully adopt them.

Further, the marine insurance sector should collaboratively develop mechanisms that prevent underwriters from insuring unsustainable practices. Sustainability should be considered the new normal in business operations, investments and projects. Marine underwriters should endorse ESG issues in their business and investment activity, whilst identifying and disclosing any unsustainable practices. For organisations that have not yet adopted best practices, transparency and annual reporting on their sustainability status can be challenging but are the cornerstones of progress.