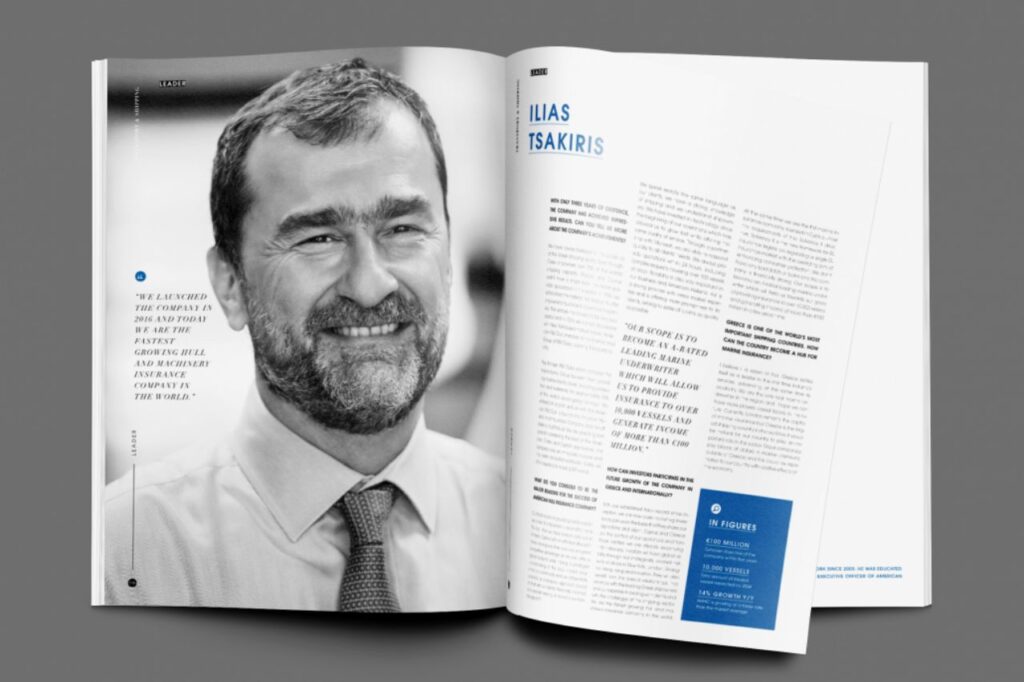 American Hellenic Hull and its Chief Executive, Ilias Tsakiris, are featured in a special edition by The Investor, showcasing leading businesses.

The Chief Executive of American Hellenic Hull, Ilias Tsakiris is featured in The Investor Greece 2019, a special edition published by The Investor, the leading business guide.

“We are the fastest growing hull and machinery insurance company in the world,” Mr. Tsakiris told The Investor in an interview, describing some of the company’s goals and milestones achieved since the launch of the new insurer in 2016.

The company’s target “is to become an A-rated leading marine underwriter which will help us towards our goals of providing insurance to over 10,000 vessels and generating income of more than €100 million in a few years’ time”, he stated.

Readers of The Investor are informed of AHHIC’s background as a joint venture with the American P&I Club and its status as the first marine insurance company licensed in Cyprus under the requirements of the Solvency II directive.

“We are operating from scratch combining the best of the American, Greek and Cypriot approaches,” said Mr Ilias Tsakiris. “The company was an immediate success and has been accepted worldwide. Today, we offer insurance to nearly 2,500 vessels.”

Discussing the reasons for the company’s impressive start, Mr. Ilias Tsakiris emphasized its different approach as a marine hull insurer and management’s background within the shipping industry.

“Insurance is a commodity and we differentiate ourselves by a bespoke approach based on trust with our clients,” he told the magazine. “Personally, I started as a seafarer serving on board ships from the age of 17. We speak exactly the same language as our clients, we have a strong knowledge of shipping and we understand shipowners.”

According to Mr Tsakiris, AHHIC has also invested heavily in technology from the beginning, enabling it to grow quickly while offering the same quality of service. It emphasizes speed of response, from providing quotations within 24 hours to settling claims faster than the industry average.

The company’s centers of operation are in Cyprus and Greece and it is steadily expanding internationally. “The fact that the company is based in Limassol, Cyprus, with an affiliated office in Piraeus, among other locations, is a great competitive advantage as AHHIC can offer a global footprint while having a privileged understanding of the local market,” Mr. Tsakiris said.

“We are the only real marine underwriter in the region, and I hope we can have more players based locally in the future.” Mr. Ilias Tsakiris, in his interview in The Investor Greece 2019, underlined his belief that Greece as a major shipping nation could establish itself as a leader in maritime services as well, including playing a more important role in the marine insurance sector.

“We have always believed in the potential of the Greek shipping sector. Even though Greek shipowners own 20% of the world’s shipping capacity, Greece and Cyprus didn’t have a single local insurance provider specialized in this sector”, he pointed out.