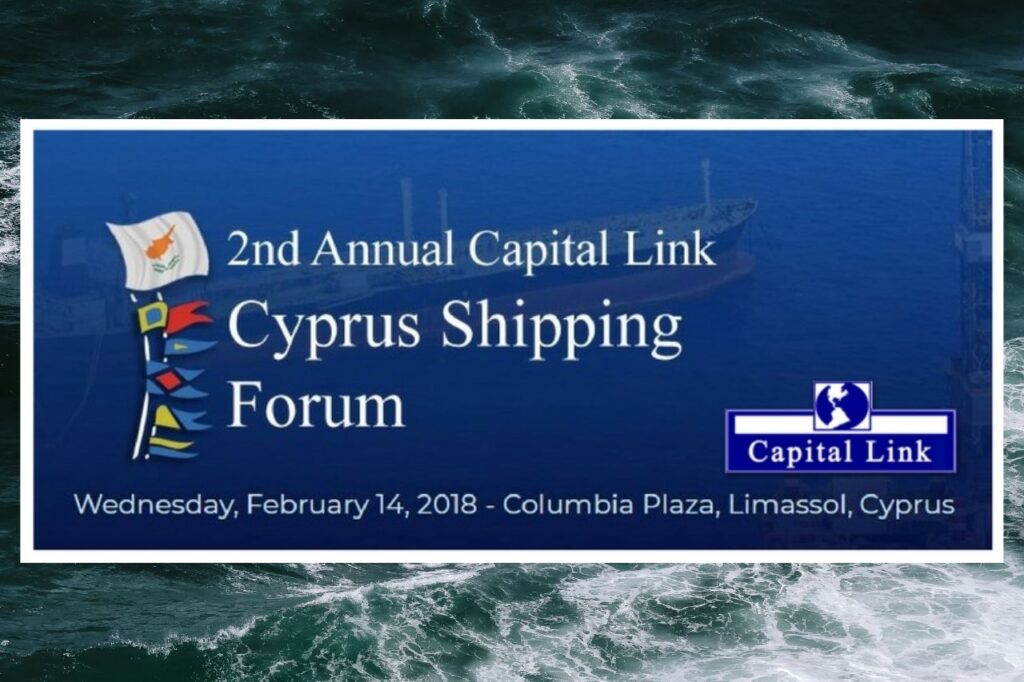 Sponsorship was led by the Bank of Cyprus and had support from the Cyprus Union of Shipowners and leading companies, including American P&I Club, represented by Ilias Tsakiris.

In February, Ilias Tsakiris attended the second annual Capital Link Cyprus Shipping Forum at the Columbia Plaza in Limassol. The event, held under the Republic of Cyprus’ auspices, was a huge success drawing delegates from abroad and the local Cyprus shipping community, including major shipowners, government officials, and shipmanagers financiers, and other leading industry participants.

The Forum highlighted the Cyprus maritime industry and the Cyprus flag, which has been recognized internationally as a quality flag. It also focused on the island’s significant role as a marine, energy, and logistics hub and, more generally, as an attractive investment and business destination.

The event’s sponsorship was led by the Bank of Cyprus and included support from the Cyprus Union of Shipowners and many leading companies, drawn from various sectors. Sponsors included the American P&I Club, represented by Ilias Tsakiris, CEO of American Hellenic Hull Insurance Company.

Participating as a conference panelist, Mr. Ilias Tsakiris analysed the marine insurance market’s current state and looked at where it is heading. He cautiously concluded that the days of a soft marine market might be over – at least temporarily. Specifically, Ilias Tsakiris commented on the effect of recent extreme weather events on marine underwriters’ pricing models, asking if storms such as Hurricanes Harvey, Irma and Maria had been a blessing in disguise, allowing underwriters at last to stop the downward spiral of marine premiums.

Accessing cyber risks and security was becoming an increasingly serious issue for marine underwriters and could not be ignored, said Mr. Ilias Tsakiris. “Cyber risks are real and are far from being remote,” he told the conference. “As cyber risks are new and there is very little historical data, evaluating and pricing such risks is one of the biggest challenges facing the insurance industry today”.